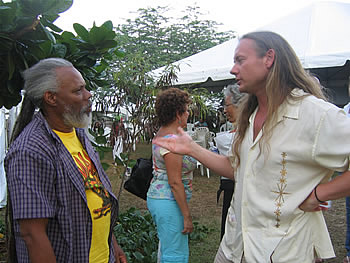 Eric Leversen was born in Indiana and now lives in Texas but is a "Jamaican".

He first came to Jamaica in 1996 as a Peace Corps volunteer at Munro College where he was the computer lab manager. At Munro he was also involved in environmental projects such as managing the energy generating wind turbine.

He then helped start the Sandy Bank computer lab by installing donated computers and conducting a computer course for the school's teachers.

Eric is the webmaster and co-founder for this site, www.treasurebeach.net. He is very proud of the valuable contribution this website is making to the community of Treasure Beach. His proudest moment so far has been in 2004 when the site was used for Hurricane Ivan relief efforts.

Eric's favourite fruits are bananas, mangoes, and guineps. His favourite colour is green. He dislikes people who do not treat others with respect. His biggest wish is that Treasure Beach remains a welcoming and safe place with economic opportunity for everyone. 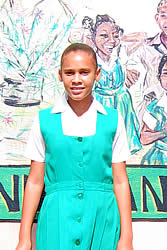 Please add your comments or messages for Eric below:

Eric thanks for this web site- love it. I love the pictures in the back ground of Shannalee.

How fabulous to see Eric as the profile of the month!!!!!!! Eric, thank you for all your contributions to Treasure Beach! This website alone has had a profound impact on the community. Much love and respect to you.

Eric, you are such a wonderful guy -- a real gem of a human being. You have done so much for the people of Treasure Beach and much of South St. Elizabeth over the years. May you continue to serve as Webmaster, and may you be able to visit Treasure Beach as often as possible.

Great to see you being highlighted, Eric. Thanks for all your help and support during Ivan's aftermath and over the years and sorry I hit you so much with the spoons - well, not really.

Hey Partner, it's about time! For those of you who may not know, Eric is the mastermind behind TB.Net. Without him, there would be no TB.Net. I have had the pleasure of working with Eric since the inception of this site and continue to enjoy our time spent together and the friendship which has come from this venture.

Eric, you were invaluable during the aftermath of Hurricane Ivan. I personally don't know what I would have done without your constant support and encouragement. The effort you put into getting the news out to people and setting up a way for persons to help was unbelieveable and will never be forgotten by those of us who love Treasure Beach.

It is a privilege to call you a friend and I look forward to working with you for many years to come.

P.S. Hmmmm, who is that you are giving technical advice to regarding his Mac that has just crashed?

Eric you are a wonderfull person with wonderfull ideas.Keep up the good work and thanks for this web site.

I join all who value this website in appreciating what Eric and Rebecca have accomplished and are accomplishing. Thanks.

I have had the pleasure of having Eric teaching me to use the computer.An excellent teacher who ensured that you get it right all the time. Eric your creation of this website has really placed Treasue Beach on a much bigger space in the world. One love my teacher

I have to say how thankful I am for the good work Eric has and still is doing for the people of not just Treasure Beach but other areas of Jamaica on a whole.As mentioned by others before, without this website myself and others would have been at a loss not knowing what was taking place in TB when the hurricane (Ivan) destroyed most of that community.
It is nice to but a face to the person with the brain and hard work behind this website.On that note I must not forget your partner Rebecca whom I think does just as good a job also.As a matter of fact without her we would not have gotten pictures and, when looking at them I could see for myself that she was butting herself in danger doing this for us all.We should call her our "Treasure Beach Journalist".She really does a fantastic job informing us of the coming and going of what's taking place in TB in general.

Hopefully one day I will be able to meet you both in person.
Thanks again.

Nice to see you Eric, as the man of the month! (singing: "star of the day, who will it be...oooh thats a New England thing I think! Well, someone will get it. haha)

Thank you for all the good work you do. Your contributions to the community are greatly appreciated by all.

Eric, you are a wonderful human being. I'm glad I got to meet ya.

I just want to know where Eric picked up that 70's bush jacket he's wearing. Did a doctor kindly leave that for him in his will :}

Just saying thank you for being the master mind behind the creation of the Treasurebeach.net. I believe it has become a popular hit to all of us who are homesick and a voice to those who wants to be heard. (Also thanks to Rebbeca!!!) Keep up the wonderful work!

Eric I am glad for this site- I visit it through the day. Love to tsee the happenings from home. Keep up the good work you and Becca.

To everyone who has posted here, I want to say thanks for the kind words and positive vibes..and a heartfelt 'Your Welcome' for anything beneficial this site has brought to you.. Its very fulfilling to know that my efforts are helping others.

Norma, you'll always be my #1 student. The story you tell about you sharing your new-found computer skills with other Jamaican teachers up in North Carolina may be my second proudest moment JA moment.

A. Todd: Your transparent jealousy of my wardobe is not very becoming. But at least you know time-less style when you see it :-)

And of course none if this would be as popular or successful without Rebecca's tireless efforts. Thanks, P.

Sooooo Eric, who is that standing there next to you? Would that be the one and only Ibo Cooper from Third World?

I first met Mr Leversen when i was in lower 6 at Munro College in 1996.I worked on that envirornmental project with him for a couple of years.We did allot of work on eutrophication and ways of trying to prevent it.The programme was all computer based and i remember Mr Leversen introducing me to the internet in the old library at Munro.I just want to wish him all the best and congratulate him on setting up this website so we can post messages and see what is happening in our communtity.I wonder if he remembers me.I was the red kid with the curly hair lol

We echo all the positive comments made about you above, Eric. You do a fantastic job for the Treasure Beach community - we don't know where we'd be without our regular dose of TB.net!! Long may it continue!

Look forward to meeting you someday!

Eric: We have come to almost meet at Rebecca's a few years ago but it never happened because I fell asleep. Regardless, your creativity and your undying devotion to the people of Treasure Beach does not go unappreciated. Thank you! Thank you!

Congratulation to Eric Leversen on being selected
as the profile for the month of June.
Your creativity as a webmaster and co-founder of
"treasurebeach.net", is highly appreciated.
I am therefore recommending that the powers that
be confer upon you the title "OD".
One love and God bless.

Hi Eric, thanks for your contribution to TBnet. It is a great idea and a wonderful way to keep in touch. May the strength and courage you need to continue this work and enjoy your life be bestowed on you by our Creator.

Hi Eric, Good to see you get the recognition you deserve I know you over the years as a humble, friendly, hardworking guy who has always been around to support the people and community here, and I'm sure always will.
One Love, Joshua

I join everyone in saying what a wonderful person Eric is .He has done so much for Treasure Beach.Keep up the good work my brother.

Hi Eric,thanks bro for serving communities all arround Jamaica especially the Primary school children who all went to Ocho Rios. Thanks again

To paraphrase the immortal words of Smokey Robinson, I second these "emotions!"

If not for Eric's "encouraging words" back in early 2005 when I e-mailed TBNet for information about the Treasure Beach area, I would not have had the pleasure of meeting the wonderful people of this community, as well as visitors from other countries and states in the US.

I was a 51-year-old single woman who had never been out of the US, nor had I ever traveled alone outside of my home state of Oregon - and even that was very limited travel. Eric assured me I would be safe in TB and that it was the best place he could think of for my first trip out of the country. I wish I still had the e-mail so I could tell you all of the wonderful things he said about Treasure Beach and the people who live in the area.

Eric, you were right. I had a wonderful time, met wonderful people, and cried when I left. Six months later I came back for another visit. I will be visiting yet again in December - it's been too long and I miss TB.

So, Eric, thank you so very much for all that you do, and especially for your encouraging words back in 2005. Your advice was some of the best I've ever received!

It's nice to see what Eric looks like. I always thought he was somewhat of a Bruce Willis look-alike. Older guy with a bald head and glasses.My! My! Was I surprised!!!

(with apologies to the Real Willie Nelson)

Momma's don't let your babies grow up to be Peace Corps.
They'll find Treasure Beach and never want to leave...
And then hurricanes will come and they won't get no sleep...

I'm viewing all these 'I thought you looked like XYZ' comments with a smile on my face.

Thanks again to all who've said all these kind words about me. (Just remember them when you're sitting next to me at a bar and my glass is empty :-)

This gentleman is a true ambassador for TB. I'm soon to return on my second trip to this fantastic corner of the world.

...and I will fill that empty glass. First and second rounds are on me.

An extra-large global big-up to Eric on the tangible contribution that he has made to Treasurebeach and the surrounding areas.Some speak of love but your kind deed is a tremendous manifestation of love that serves thousands of people. One love brother ! Your vibes are helping to keep us alive.