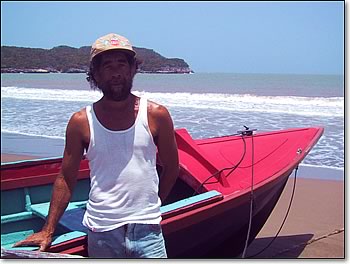 My father's name is Herman Reginald Wong affectionately known as Tommy. He was born on the 23rd of November, 1958. He has been married for 17 years and has three daughters whose names are Julia, Miriam and Oshin. His parent's names are Eva and Herman Wong. His father died when he was about 4 years old and his mother went to England so he and his five sisters grew up with their grandparents in Great Bay.

My father is a fisherman in the district of Great Bay. A lot of people say he is the best fisherman in Great Bay but let's leave that up to them to decide. He goes to sea very often as long as the weather is good. My father says that fishing is a very dangerous, hard and tiring job but is also exciting and rewarding. He has two methods of catching fish, traps that catch smaller fish and lobsters, and line that catch big fish. The biggest fish my father caught was a Blue Marlin that weighed a whopping 105 pounds.

He owns two canoes. One was named after his first daughter, Julia, and its name is Lady Julia. One of his boats is purple and red and the other is blue, white and red. Fishing is what he does for a living and he enjoys it very much. 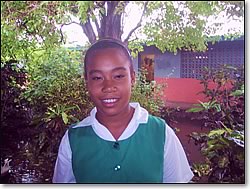 Please add your comments or messages for Tommy below:

I have had the pleasure of meeting Tommy through his sister Marie. He seems to be a very humble man and has a beautiful family. Congratulations to you Miriam, on a well written profile on your father.

Hi Mr Wong I can remember your father very well he died when I was 19 years old and I always thougth he was the only good man that come out off great bay(SMILE) so I hope you are like your dad I leave Jamaica in 1962 the year I think he died and come to Endland he was a good person to me I always remember him I come from calabash and when I come out there will try to see you so good luck with your fishening and may the good Lord go with you when you go to sea and also blessed your family I am a nephew on mr Norrie Gordon he died 2 years ago. And son of Mr Zacchous James.

I just wanted to say how beautiful you look, Miriam....and how proud I am of you and your father. Please send my regards to Julia and Oshin.

What a nice profile of your father, Miriam. When we were in Great Bay at the end of April, your father took us in his canoe along the coast and up the Black River to Lacovia. We had a wonderful time, one we still talk about fondly. The sea was a bit rough (at least to our untrained selves) on the return trip, but your father eased his canoe up and over those waves smoothly. Now and then our trip with your father comes up, and again we talk about how your father "read" those waves. Please give him our best. It was Craig who arranged the trip for us; please give him our best as well. Oh yes - I will send photos I took of your father and Craig that day, as soon as I can get them printed.

Eight years later and I'm just finding out that this was posted. Thank you Cherisse and Miss Amy. Jane and John, I will give my father the message.