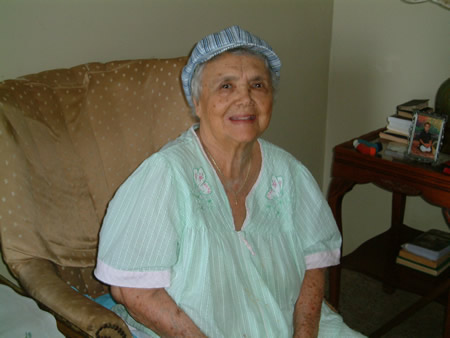 Aunt Dor enjoyed travelling and as a result, she also resided in New York, U.S.A and Lethe in St. James. Aunt Dor was married to the late, Winston Reynolds with whom she had two sons, Winston and Harvey Reynolds. She was a housewife and a seamstress.

Her favourite colour is pink and she enjoys a lovely dish of guango soup. Her favourite saying is ‘God Bless You’. Aunt Dor enjoys having visitors. She hopes that the youths of Treasure Beach will study hard and be model citizens.

Please add your comments or messages for Mrs. Doris Aditah James Reynolds aka Miss Dor or Du-du below:

It's a pleasure seeing Miss Dor profiled for the month of February. What a beautiful smile! I always admire her for her modesty and the way she expresses herself.
A great job Shakiera. Work hard and you will accomplish your goal.

Wow.Aunt Dor u still remine beautiful,Watch that smile.May God continue bless and keep u.Keep up the good work Shakiera ur a nice young lady,rememeber the sky is ur limit,U go Girl.

Ho" Aunt Dor it so nice to see you, i was always wondering what happen to you, i keep asking for you i remembered that lovely smile,i missed to see you and Bro Winston whenever i come home i would love to get in touch with you.Its Murna Vyris daughter your cousin.

Miss Dor, you look like any young girl!
You are loved by many, especially your sons & daughter, Bette. RIP
Maxine

R.I.P Aunt Dor,I will cherish the happy moments we had together.